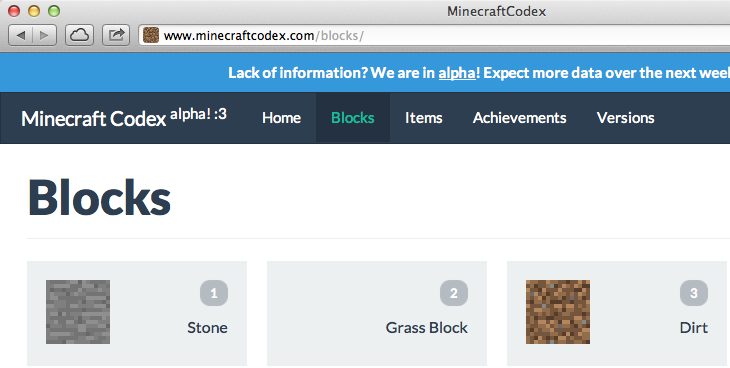 For those who don't know, I started a site a while ago minecraft related (yes, the one I dropped). If you don't know what minecraft is (really?!), you can check the official site, since this game can be a little difficult to explain.

The project (which is online at minecraftcodex.com) is just a database of items, blocks, entities, etc. related to the game, but as in any other site of this kind, entering all this information can lead to an absolute boredom. So I thought... what if I can extract some of the data from the game classfiles? That would be awesome! Spoiler alert I did it.

Think this as my personal approach to all steps below: it doesn't mean that they're the best solutions.

Unpackaging the jarfile and decompiling the classes

First of all, you have a minecraft.jar file that it's just a packaged set of java compiled files, you can just tar -xf or unzip it into a folder:

With this we now have a folder called _jarfile__ _filled with all the jar contents. We now need to use a tool to decompile all the compiled files into .java files, because the data we're looking for it's hard-coded into the source. For this purpose we're going to use JAD, a java decompiler. With a single line of bash we can look for all the .class files and decompile them into .java source code:

All the class files have been converted and for ease of use, we've moved them into a separate directory. But there's a lot of files! And also, when we open one...

Look at that beautiful obfuscated piece of code! This is getting more interesting at every step: almost 1.600 java files with obfuscated source code.

Searching for the data

I took the following approach: Since I know what I'm looking for (blocks, items, etc) and I also know that the information is hard-coded into the source, there must be some kind of string I can use to search all the files and get only the ones that contains the pieces of information I look for. For this test, I used the string "diamond":

As you can see, with a simple word we've filtered down to five files (from 1.521 in this test). Is proof that we can get some information from the source code and we now to filter even more, looking around some files I selected another keyword: flintAndSteel, works great here, but in a real example you will need to use more than one keyword to look for data.

Only one file now, we're going to assume that all the items are listed there and proceed to extract the information.

This was the more complicated thing to do. I started doing some regular expressions to matchs the values I wanted to extract, but soon that became inneficient due to:

After some tests, I decided to convert the java code into python. For that, I used simple find and match to get the lines that had the definitions I wanted, something line this:

Since that java code is not python evaluable, just convert it:

Now I defined an object to match with the java code definitions when evaluating:

As you can see, this class have a global "catch-all" method, since we don't know the obsfuscated java names, that function will handle every call. In that concrete class, we now that an object method with only one string parameter is the one that define the item's name, and we do so in our model.

Now, we will evaluate a line of code that will raise and exception saying that the class name <insert obfuscated class name here> is not defined. With that, we will declare that name as an instance of the GameItem class, so re-evaluating the code again will return a GameItem object:

And with this, getting data from source code was possible and really helpful.

A lot of things could be improved from this to get even more information from the classes, since after spending lot's of time looking for certain patterns on the code I can say what some/most of the parameters mean, and that means more automation on new releases!

Apart from getting the base data for the site (all the data shown on minecraft codex is directly mined from the source code), I made up a tool that shows changes from the last comparision -if any. This way I can easily discover what the awesome mojang team added to the game every snapshot they release:

This is the main tool I use for minecraft codex, is currently bound to the site itself but I'm refactoring it to made it standalone and publish it on github.